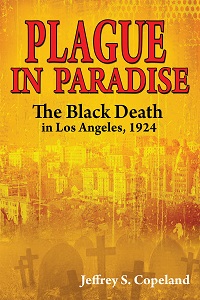 Families in the Mexican community of Los Angeles are getting sick. Some are dying. Has the Spanish Influenza returned as some suspect? Dr. Matthew Thompson, the most skilled diagnostician at Los Angeles County General Hospital, fears something even more deadly. When patients develop boils, their skin darkens, and they start coughing up blood, his worst fears are confirmed: Plague―the Black Death―has taken root just a few miles from the hospital and main center of commerce of the city.

Some in civic government and even a few high ranking medical officials would like this outbreak kept quiet, even if the secrecy costs the lives of those presently afflicted. The reputation and future of a whole city is at stake. It is more important to protect “The Paradise of

the West,” as Los Angeles is now known for its healthful climate, beautiful beaches, and bountiful opportunities.

What happens when a plague hits a minority group whose welfare is of little concern to government and medical leaders? Dr. Thompson, Nurse Maria McDonnell, and Fr. Medardo Brualla of Our Lady Queen of Angels Parish decide to fight for the welfare of all, but they find themselves facing much more than a medical crisis: fear, racism, and greed.

Based on a true story.

Reviews
“Plague in Paradise unfolds like a thriller with characters working around-the-clock to solve a mystery, but the search isn’t for a villain. In Jeffrey S. Copeland’s recent work of literary nonfiction, real-life heroes, Dr. Matthew Thompson and Maria McDonnell must find the source of an outbreak of the Plague before a medieval scourge threatens all of Los Angeles, a city already reeling from the Influenza Epidemic of 1918. The threat posed by the illness brings out both the best and worst in people, and readers will find themselves tracking both clues and individuals’ motivations in this page-turner.”–Eileen O’Brien, Director of Facilities and Operations, Archdiocesan Catholic Center, Archdiocese of Los Angeles

“In Plague in Paradise, Jeff Copeland gives us a historical medical thriller viewed through very human eyes. The questions posed about who we are as a nation and how we deal with public health crises are more relevant today than ever before. These lessons of the past need to be remembered by our cities and our medical community as we face a world that has gotten smaller, where diseases from half way around the world can reach our shores in a few weeks, and the fate of those very different from us is so closely tied to our own.”–Umraan S. Ahmad, MD, CT Surgeon)

“Plague in Paradise tells the stories of medical heroes and villains, and of racism against Mexican-Americans, whose lives were not accorded the same value as white Americans. The result is a gripping read from cover to cover, highly recommended.”–Paul T. Vogel, Midwest Book Review