From time to time I’ll be posting pictures from book events and my experiences and adventures related to the writing of my stories. 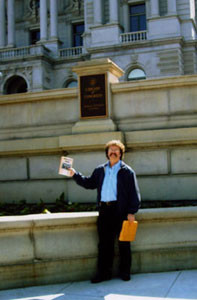 I very much enjoyed my visit to the Library of Congress in Washington, D.C., where I donated the letters and other materials I used in the writing of Inman’s War. The tour of the “behind the scenes” corridors of the Library of Congress was something I’ll never forget. I’ve never seen so many rare and famous books in all my life!

I was able to do several book events in Europe. My favorite place to visit while over there was Rome. 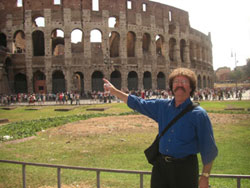 I also visited a small town called Nettuno, which is about forty miles south of Rome. At Nettuno is the “Sicily-Rome American Cemetery and Memorial.” Over 11,000 Allied soldiers are buried there, including many members of the 449th (from Inman’s War) who did not make it back home. I stood at the grave of one of the soldiers I had written about in Inman’s War and was overcome by emotion. So many sacrificed so much in the name of freedom, and these sacrifices should not be forgotten. 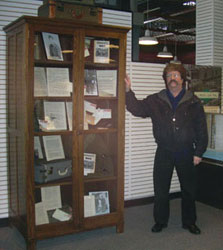 Union Station in St. Louis was one of the largest train stations in the U.S. during WWII and has an important place in the telling of Inman’s War. Today the station has been converted to a large indoor shopping mall, but they also have a museum to preserve their rich past as a train station. I was honored they chose to create a whole exhibit related to Inman’s War. For the exhibit I donated copies of some of the original letters, Inman Perkins’ actual helmet and military coat, and several other items related to the characters in the story. The next time you are in St. Louis, stop by and see the exhibit in their museum.

While at the “Big Read Festival” in St. Louis, Missouri, I was able to walk the grounds with some Wild Things and other interesting characters. Notice I’m still on my crutches in the picture. No more kickboxing for me for a long time! 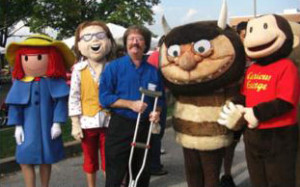