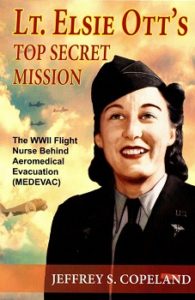 Lt. Elsie Ott’s historic, top secret mission in January 1943 helped pave the way for dramatic changes in the way wounded an ill soldiers received vital care: aeromedical evacuation. Lt. Ott was given the task of transporting five critically ill and wounded patients from Karachi, India, to Walter Reed Hospital in Washington, D.C. The mission unfolded over 13,000 miles and six and a half days by air transport, a journey that at the time normally would have averaged three and a half months by truck, ship, and train.

During the groundbreaking journey, Lt. Ott and her patients faced German Fighters, guerilla snipers, altitude challenges, logistical nightmares, and more. In the end, her efforts provided the foundation for a new “Flight Evacuation Nurse” program that sent hundreds of nurses to the air, saving the lives of thousands of soldiers the remainder of the war. For her bravery, determination, and courage, Lt. Ott was the first woman to be awarded the Army Air Medal.

The lessons learned at the time also helped establish aeromedical evacuation teams (today shortened to MEDEVAC) all over the globe, providing medical care and coverage that has saved millions of lives.

Reviews
“Jeffrey Copeland explains the complicated origins of something that most military members now take for granted—the promise of swift evacuation from the battlefield if wounded. Lt. Elsie Ott and her NCO Sam Rigazzi were two Army Air Forces medical professionals who made the first long-distance aerial medical flight, from India to Walter Reed Army Hospital in 1943. They were ordinary soldiers called on to do the extraordinary, and their experience set the standard for today’s highly complex medical evacuation system. Telling their story for the first time, this book brings the two to life fully and completely. I couldn’t put it down.”–Lt. Colonel Michael Burke, U.S. Army, retired.

“Her story reads as an inspiring testament to the belief that one devoted person can not only save lives but change the world. Without her we may not have seen those helicopters flying in the wounded for M.A.S.H. a decade later in Korea, or today’s massive transports bringing casualties from the Middle East and other locations.”– Jerome Klinkowitz, author of Their Finest Hours: The RAF and the Luftwaffe in WWII, With the Tigers Over China, 1941-42, Yanks Over Europe, and Pacific Skies: American Flyers in World War II.

“Copeland straps readers alongside Ott and her five patients in the belly of the Able Mabel, a re-fitted Douglas DC-3 plane, as they attempt the first long-distance, medical air evacuation. Details from Ott’s flight log and personal notes help re-create their harrowing six-and-a-half day journey from India to the United States.”–Sally M. Walker, author of Secrets of a Civil War Submarine and Boundaries: How the Mason-Dixon Line Settled a Family Feud and Divided a Nation