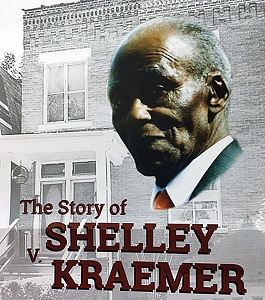 Because I had written Olivia’s Story: The Conspiracy of Heroes Behind “Shelley v. Kraemer,” a couple years back I was asked to create a documentary film about the famous “Shelley v. Kraemer” U.S. Supreme Court ruling for an important Civil Rights exhibit. I had a wonderful time putting together the documentary, and I was very proud when it became a part of the exhibit “#1 in Civil Rights: The African American Freedom Struggle in St. Louis.” The film was then viewed by over a million and a half visitors to the exhibit over the next year at the Missouri History Museum in St. Louis, Missouri, and other venues. The film became quite popular, so I was then asked if I could make it available to schools, other organizations, and the general public. As a result, I then decided to do a shorter version of the documentary for Amazon Video. You can find the documentary here.

Here is a description of the documentary:
The “Shelley v. Kraemer” U.S. Supreme Court decision is considered one of the most important rulings in the history of the country. This 1948 case ended the practice of “restrictive real estate covenants” dictating where people could, and could not, live based on issues of race, color, creed, and national origin. Described here are the actions of the brave people who fought to bring this about.